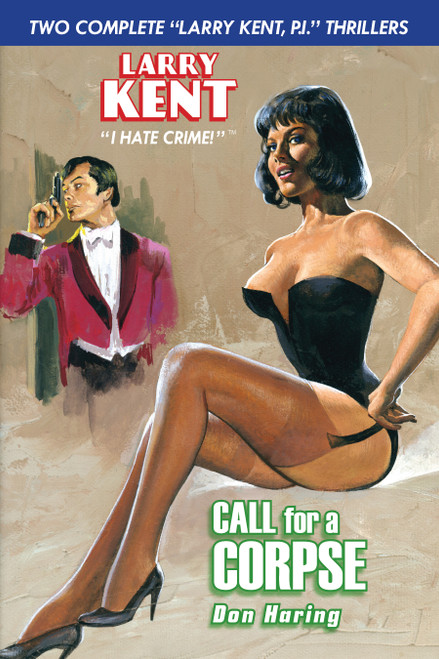 Call for a Corpse

It was a game of cat and mouse right from the start. Mallory Queen, a former State Department man who’d gone freelance, had a plan. He wanted to trade Willis Browning, a CIA-held double-agent, to the Russians in return for a spy named Vordak, who possessed a vast amount of information relating to Russia’s space program.

The CIA would never willingly release its prisoner, of course, but because Vordak was the bigger prize, Queen decided to snatch Browning away from them. So he enlisted private eye Larry Kent—a former CIA man himself—to mastermind the kidnap … even if it meant that Larry had to sell out some of his closest friends to do it.

It started with the name ‘Emanuel Kadaver’ and a New York address … both of which were written on one side of a five-hundred dollar bill. Intrigued, Larry Kent went along discover just what his mysterious benefactor wanted. Next thing he knew he was stranded fifteen hundred miles from home with two whole days missing from his memory.

Who had dumped him on a lonely, humid island in the middle of the Louisiana swamplands? Aside from Kadaver, there were only two other suspects—a tawny-haired swamp girl named Becky, who longed to become a woman, and the mysterious Miss Baines, whose gloomy, run-down mansion was patrolled by dogs who had been trained not just to defend, but to kill.
Only one thing was for sure—if Larry didn’t clear himself of the neatest frame-up he’d ever encountered, he had an appointment with the electric chair …