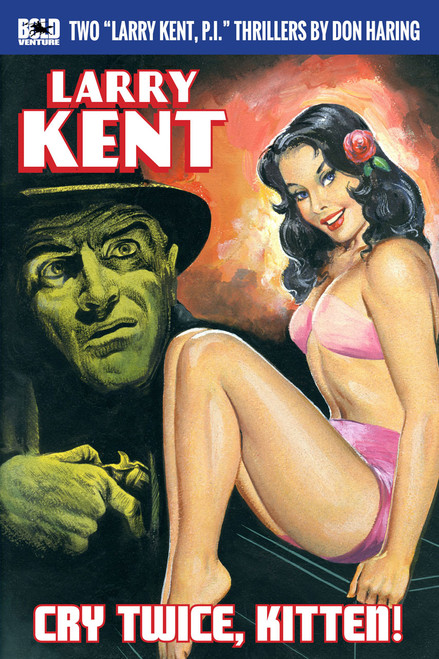 Jacob Troy was an old man who had it all; a movie-star wife, a vast and thriving business empire—even a castle he’d bought in Germany and had transplanted brick-by-brick onto some of Hollywood’s primest real estate. But he wanted more. That’s why he had hired mobster Danny Hester to put the squeeze on nightclub owner Paul Huntsman.

Huntsman hired Larry Kent to find a connection between Troy and Hester that would stand up in a court of law. If he could expose Troy, then he could ruin him. Almost before Larry took the case, however, things moved fast. A case of kidnap, a sadistic beating, a neat little frame-up and a grisly murder, just for starters. What should have been a straightforward assignment soon found Larry Kent fighting for his life.

Larry Kent’s old buddy Jim Calloway was murdered over a woman … so they said. But who was the woman? No one seemed to know—not even Jim’s killer. Larry suspected the woman was just a diversion. There was another reason for Jim’s death. And just maybe it had something to do with his job with the Narcotics Bureau. Only thing was, Jim was a minor official at the Bureau, no one with any clout, just a desk-jockey.

One thing for certain. There were people out there—important people—who wanted to bury the case. And if they couldn’t kill Larry to stop him investigating, then just maybe they could send him to Cuba in search of a missing man. After all, he’d be easier to rub out in a foreign country …