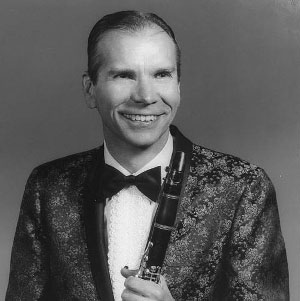 In his heyday, Charles Boeckman (1920-2015) was a working jazz musician by night — and a hard-hitting pulp fiction author by day!

Growing up in the Great Depression, he lacked money for music lessons or a college degree. At the end of a one-year community college business course, he could type 100 words a minute. That skill got him several day jobs while he taught himself clarinet and saxophone.

He wrote westerns and mystery/suspense stories. His Texas background — Born in San Antonio, in a hospital not far from the Alamo — western stories flowed out of him. His name soon appeared on many pulp magazines on newsstands every month, but he is most closely identified with the crime digest magazines of the 1950s like Manhunt and Justice.

Eventually, he led his own jazz band. His wife Patti was a fellow musician and writer. She wrote several novels for the “Silhouette” line in the 1980s, and a few were co-authored with him. (One editor claimed men could not write romance stories.)

Boeckman authored many nonfiction works, including a comprehensive history of jazz. In 2009, he was awarded a star in the South Texas Music Walk of Fame in Corpus Christi, Texas.

More of his fiction is available at www.boldventurepress.com, from Bold Venture Press, including his auto-biography, Pulp Jazz: The Charles Boeckman Story (2015).

Bill Pronzini interviewed Charles Boeckman and Talmage Powell in 1995 — two giants of the "digest" era of science fiction and mystery. See the video below ...