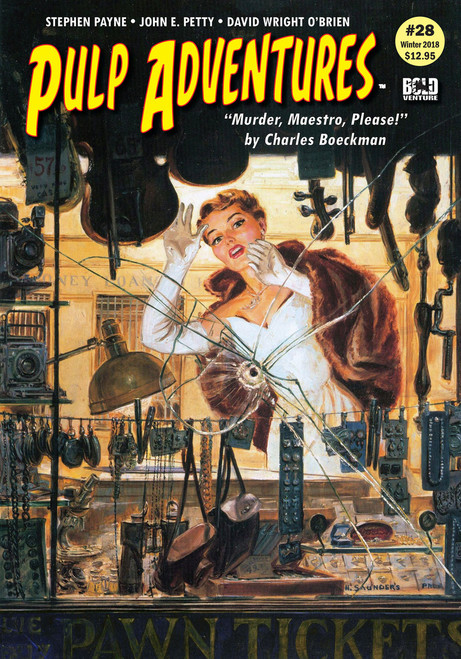 Featuring a never-before published cover by Norman Saunders, the King of the Pulp Artists!

Pulp Adventures pushes the envelope again with a mash-up of horror, western, mystery, and romance!

From the classic pulp fiction side of the tracks:

Charles Boeckman, the jazz musician turned pulp author of Strictly Poison and Other Stories, delivers a tale of music and hatred with "Murder, Maestro, Please!" This story originally appeared in Famous Detective Stories, just as the publication's style was changing with the times. The fiction was becoming increasingly hardboiled, but also dwelt on characters' psychological problems, rather than blood 'n thunder action. Boeckman's stories of sad losers attempting to elevate their lot in life was perfect for this transition -- in the 1950s, he was a frequent contributor to digest fiction magazines like Manhunt, Justice! and Homicide.

David Wright O'Brien penned many fantastic tales under his own name, but he also used pseudonyms like John York Cabot and Duncan Farnsworth (an homage to his uncle, Farnsworth Wright, editor of Weird Tales), sometimes in collaboration with other writers. Pulp Adventures presents a four-faceted look at David Wright O'Brien -- first a biographical piece by Audrey Parente, second a facetious essay by Wright himself from the March 1942 Amazing Stories, and two stories (written under his pseudonyms) from the same pulp magazine. "The Fantastic Twins" is a farce about an ad-copy writer given a special gift, while "Afraid to Live" takes a more serious tone with the reporter protagonist racing against time to save potential suicide victims.

Additional pulp classics include "Killer Wanted — First Class" by Geoffrey North from Private Detective Stories, and "The Word Wranglers" by Stephen Payne from the March 1949 issue of West.