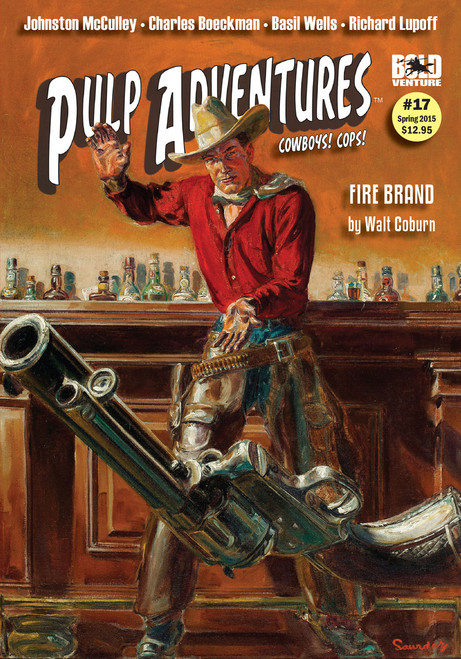 "The Kidnapped Midas" by Johnston McCulley
The Thunderbolt shows a stingy skinflint the error of his ways by making him pay his own ransom.
"I'll Make the Arrest" Charles Boeckman
A police lieutenant assures everyone that he'll arrest a murder suspect -- until the case turns personal ....
"Caverns of Ith" by Basil Wells
Could humans and the race of interior world dwellers co-exist peacefully? It was possible, if they could stand together against a group of raiders ...
"Firebrand" by Walt Coburn
That ugly accusation had been branded onto his skin, and he would carry it with him to the grave ... but he intended to usher the culprits into the grave ahead of him!
"Working Class Hero" by Richard Lupoff
Basil Wells remains an overlooked treasure in science fiction.
"Introduction to Caverns of Ith"
A brief introduction to a science-fantasy classic.
Original pulp illustrations, plus new art by Ed Coutts.
Cover by Norman Saunders.