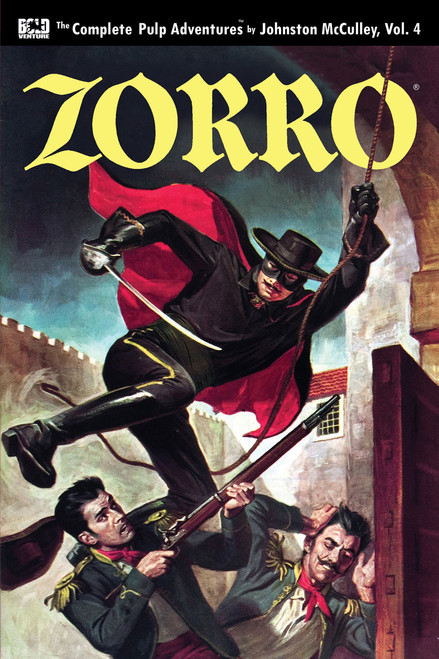 The Complete Pulp Adventures, Volume 4 of 6

Bold Venture Press presents The Sign of Zorro, a full-length adventure from 1941, never reprinted since its original publication.

In Reina de los Angeles they no longer whisper of Señor Zorro — The Fox. For he rides no more; his sword no longer serves the oppressed. And that languorous dandy, Don Diego Vega, fritters the days away, caught in a real and terrible apathy. The sudden and tragic death of his wife has left him without any urge to don his black cloak and mask; and his father, Don Alejandro Vega, is seriously disturbed. If only his son would return to full life; if only Zorro would ride again ....

Then, through Bardoso, the one-time pirate, Don Diego receives word that the beautiful Senorita Panchita Canchola desperately needs the aid of Señor Zorro. Her brother, now the man of the household, is the dupe of a clever scoundrel, whose sinister plans threaten the Governor of California. So Zorro lives again .... And this time he must preserve the life of the man who has sworn to capture him!