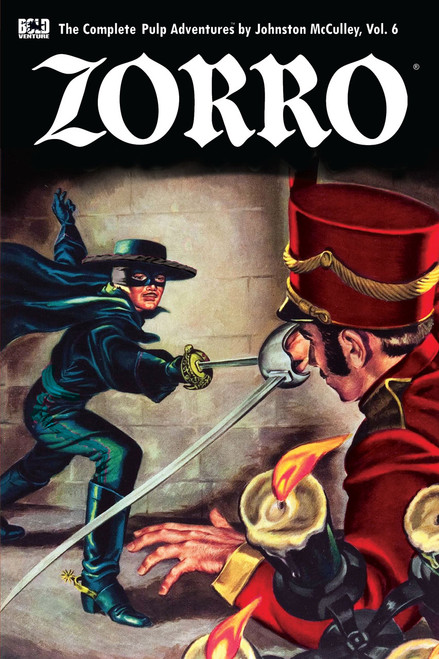 The Complete Pulp Adventures, Volume 6 of 6

“McCulley was a first-rate talent, who could create a sense of time and place with ease, who fashioned vivid characters from stock material, who wrote action well and conveyed mood beautifully.” -- From the introduction by Max Allan Collins, author of Road to Perdition and the Quarry series.

This volume features Zorro’s Fight for Life, originally published in West magazine for April 1951 and never before reprinted. Sixteen additional short stories — from West, Max Brand’s Western Magazine, and Short Stories For Men — are included, with an introduction by Max Allan Collins, and an afterword by Rich Harvey.

Capitán Juan Ruelas had been at his new post for only a fortnight, but already was known as an extremist in brutality. He was certain the peons and natives sheltered Zorro, their masked defender. Don Estaban Santana relished the torture, and hatched a scheme to capture the vigilante and disgrace Don Diego Vega, unaware they were one and the same! Then Zorro had another challenger on his hands — Americano Pete Jordan, a loose cannon whose stubborn pride might kill them all!

Some Zorro stories had remained out of print since their original appearance in the pulp magazines. Now, for the first time, Johnston McCulley's original stories of the "Curse of Capistrano" are collected into one complete set — Zorro: The Complete Pulp Adventures.