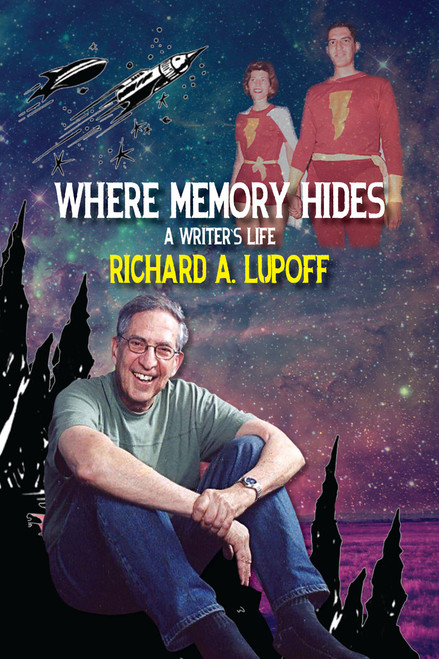 by Richard A. Lupoff
(Also available in eBook edition)
“Lupoff writes with intelligence, humor, wisdom, and a zest for life. He had a lot of fun writing this book, and it shows; because of it, we have a lot of fun reading it.”

"Lupoff’s autobiography … is a delightful tour in which the subjects that caught his fancy and stoked his enthusiasm for them are front and center … The roster of writers and editors whom he knows and names reads like a who’s who of contemporary popular publishing. Lupoff, always a fan at heart, has left his mark on genre fiction and popular culture of the last five decades, and readers with an interest in the fields he has touched will want to read this memoir and his reflections."
— Read the full Publisher's Weekly review

Where Memory Hides is a guided tour through the life and career of mystery and science fiction’s most versatile practitioner. Richard A. Lupoff has been a professional author for six decades, and a life-time fan of everything from pulp magazines to comic books, science fiction and mystery, and more. As the extensive bibliography (included in this book) demonstrates, Lupoff's credits run the gamut of fiction, nonfiction, mainstream publishing, and fan journals. In the 1960s, he penned All In Color For a Dime, a foundation-laying work for modern comic book fandom, and Edgar Rice Burroughs: Master of Adventure, a study of Tarzan's creator.

In Where Memory Hides, Lupoff regales readers with triumphs and tribulations from his six-decade plus career. The Comic Book Killer and Marblehead are among his best-known novels. His short story 12:01 PM, filmed twice in the 1990s, added a new sub-genre to science fiction and spawned a legion of imitators. He also offers insights of writing, and haggling with agents, and literary criticism of authors such as Dashiell Hammett, H.P. Lovecraft, Edgar Rice Burroughs, and many others.

“… (Lupoff’s) books and stories, I can testify, having read a great many of them and published some myself, almost unfailingly display not only his intelligence and perceptivity, but also the grace and charm of his wit, the skill of his narrative technique, and the exemplary individuality of his ideas. That is to say, he’s a damned good writer.”
— Robert Silverberg, author of The Book of Skulls

“… Although in his 80s, Lupoff still writes with the enthusiasm of a young fan …”
— Publisher’s Weekly