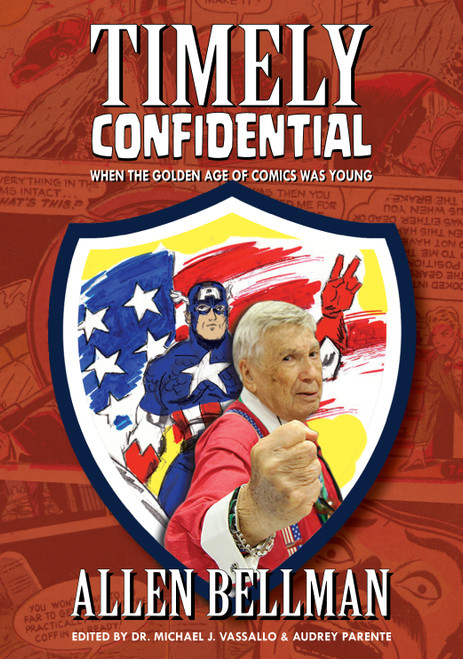 by Allen Bellman
Available in softcover and hardcover. Exclusive to the hardcover edition, the 26-page "Deluxe Comics Gallery, featuring five additional comics stories, six installments (on one page) of the "Magic Circle Game" newspaper feature, and additional photographs of Allen and friends.
One day in 1942, a kid who liked to draw responded to an advertisement in the New York Times. He carried his portfolio to a young, upstart publishing company, landing a job on the spot. That company would become Marvel Comics …
Allen Bellman participated in the early years of popular characters like Captain America, the Human Torch, and the Sub-Mariner. One day he left the comics field and never looked back. Five decades later, an intrepid “Golden Age” comic book collector located him. Allen received a hero’s welcome from comic book historians, and now appears at conventions nationwide, proclaiming “I was there!” Herewith, his circuitous journey back to comics …
Chapters include "The Kid Who Penciled Captain America," "Behind the Scenes at Timely," "Stan Lee, the Excelsior Man." A bibliography traces Allen Bellman's work for Timely Comics and Atlas Comics; and the "Comics Gallery" presents five complete comic book stories: “Background for Crime,” “A Penny’s Worth of Love,” “The Sergeant’s Son,” “When the Lights Went Out,” and “I Made Three Promises." The forward is written by Dr. Michael J. Vassallo, with afterwords by Michael Uslan and Mike Broder. [The deluxe edition also includes the comic stories "Vampire Brats," "Kidnapped," "The Mad Dogs," "The Old Man," and the "Magic Circle Game" newspaper feature.]
In the pages of Timely Confidential, Allen recalls growing up in Brooklyn, and commuting to the McGraw-Hill building (and later the Empire State Building) every morning to work at Timely Comics; friction between different divisions of artists and writers; brushes with celebrities; Martin Goodman's failed expansion into Broadway plays; Allen's departure from the comic industry in the 1950s; a second career as a graphic designer and photographer; a move from the New York City area, capital of publishing worldwide, to the Florida tropics; and his return to the world of comic book fandom nearly six decades after leaving the field.
Timely Confidential is loaded with photographs and illustrations — a visual feast with thought-provoking text by one of the last remaining figures in the Golden Age of Comic Books.