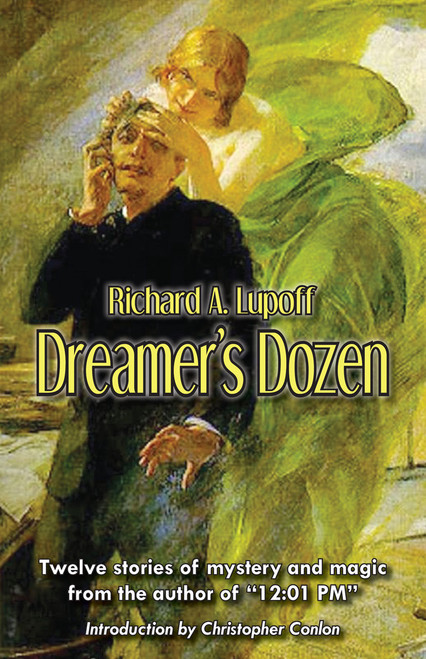 by Richard A. Lupoff

“Fans of Hugo-winner Lupoff (Claremont Tales) will welcome this collection of 12 short stories, many of them pastiches (in a variety of genres) written with obvious affection for the originals … Readers are likely to agree with Christopher Conlon's assessment in his introduction that Lupoff is an ‘extraordinary literary chameleon.’”
— Publisher's Weekly review

The author of The Comic Book Killer offers up twelve tales of mystery, science fiction and fantasy — A woman’s birthday celebrationbecomes a prelude to murder; an absinthe-minded author seeks inspiration from a bottle; a rare volume could destroy the love/hate relationship of two book dealers; an interplanetary romance is threatened by the untimely intervention of the Scorpion Men of Mars; and that’s just the beginning! These stories leap from planet to planet, down dark avenues of hatred, and curl up in cozy nostalgic places.

"Happy Birthday, Birthday Girl!"—A woman's "celebration" becomes a prelude to murder.
"The Green Fairy"—Moving the setting from a noir-realistic world into a realm of fantasy.
"Sisoh Promatem"—Shifting gears, moving further into the realm of imagination. "Tip o’ the tam to Franz Kafka," says Lupoff. "Or should I say, Znarf Akfak?"
"Uncle Elmer"—A World War II veteran's tall tale is disected with some disturbing revalations.
"Greetings from Comrade Kim"—A world-shifting tale
"Night Lands Dream"
"The Salamanca Encounter"—A borderline horror story, with a tip o’ the tam to HPL.
"Scorpion Men of Venus"—It was the wrong time to begin an interplanetary romance. (Tip o’ the tam to ERB!)
"Dead of Winter"—A "tip o’ the tam to Rex Stout."

ALSO: Three "Tales of the Tin Can World," originally presented in Rigel science fiction magazine.
"Lux Was Dead Right"—A rare volume threatens to destroy the love/hate friendship of two book dealers.
"Transtemporal Creatures Unlimited"
"Joe Nieman’s Knees"—He was a great ballplayer in his time ... but that was long ago ...
In half a century of publishing books and short fiction under his own name and at least six pen names, Richard A. Lupoff has spun some of the strangest fables, written a respected biography of Edgar Rice Burroughs, won a Hugo and been nominated for multiple Nebula Awards. His story “12:01 PM” was adapted into an Oscar-nominated short film. In this collection, Lupoff spins his wackiest and most wonderful tales — many of which appear for the first time in Dreamer's Dozen.