“In the world of adventure writers, Jim Mullaney stands on top of the mountain. Read him now. You’ll marvel and then you’ll roll on the floor, laughing.”

— Warren Murphy, creator of The Destroyer

"If you love modern pulp, then The Red Menace is a mandatory series for you to read. It's fresh, remarkably well-written, and incredibly entertaining. I can't wait to see where the series goes next. Highly recommended!” 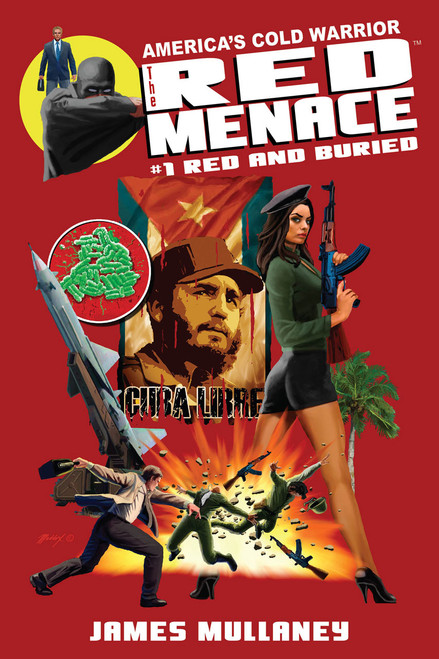 Red and Buried marks the "return" of The Red Menace, the number one enemy of anti-American forces in the 1950s! When his deadliest enemy surfaces in Cuba, decades later, The Red Menace takes the mothballs from his stealth cloak and strikes off to settle an old score — permanently, with the future of Democracy hanging in the balance. Jim Mullaney, co-author with Warren Murphy of Remo Williams: The Destroyer, delivers a tour de force of action-adventure and political satire.

Twelve years later, Podge Becket, computer tycoon and security expert, thinks he’s hung up his mask and cape for good. He escaped the spy game while still a young man, and none but a select few know about his long-dead secret identity. But into his restless retirement steps a ghost from his past, a bitter Russian colonel with nothing to lose and the means to wreak worldwide destruction.

Aided by his partner, inventor and physician Dr. Thaddeus Wainwright, the Red Menace is dragged back into the hero game. But it’s a whole new world out there, and if the Menace doesn’t watch his step, the swingin’ Seventies might just find him RED AND BURIED!