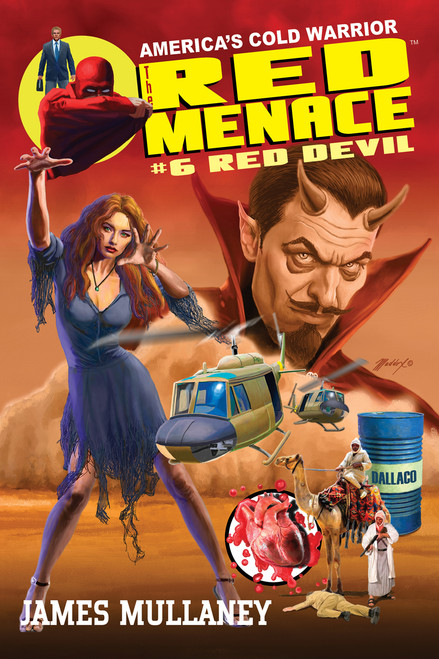 When the nation’s number one oil company becomes a target of terrorists, everyone naturally blames the usual rabid environmentalists. After all, when you’re as big as Dallaco Oil and its larger-than-life CEO Jim Bob Slickens, you get a pretty good sense of who’s painted that bull’s-eye on the back of your ten-gallon Stetson. Except now Dallaco’s Mideast well-fires and ocean oil spills attract an enemy a few millennia older than the Sierra Club. Who is the mysterious red fiend with the crooked horns hellbent on disrupting the world’s petroleum supply?

America runs on oil, and Director Simon Kirk of MIC vows to keep the motor running come hell or high water. Kirk calls in his two top men to make a deal with the devil: the permanent kind. Podge Becket and Dr. Thaddeus Wainwright soon discover giving the devil his due is harder than they imagined. The road to hell is paved not with good intentions, but with the bodies of innocents.

The Red Menace vows to raise hell and stop the evil figure with the fiery eyes, but this time the masked man might not have a snowball’s chance …

The Spider #7: Serpent of Destruction

The Spider #5: Empire of Doom