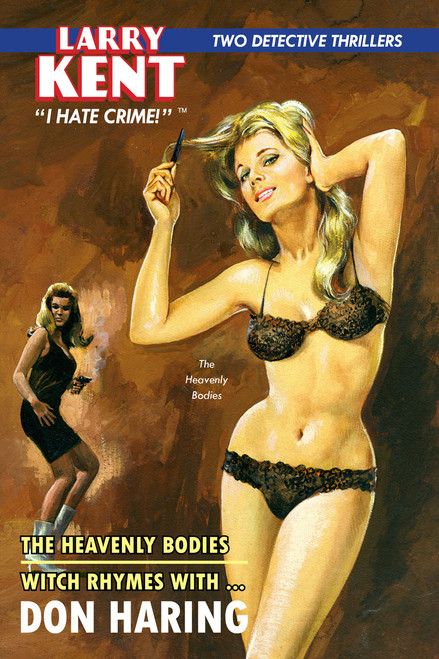 Fred Wallis came to Davidson, California, with a big, crooked plan in mind. Then he just … disappeared. Fred’s brother hired Larry Kent to go west and find out what had become of him—a job Larry was glad to accept, since Fred had been a childhood friend of his.

But the minute he started asking around, he became a target. Someone wanted Fred’s secret plan to remain just that. But who was behind the attempts on Larry’s life? Carl Esposito, the oily little manager of the Carousel Club? C. R. Partridge, whose bonhomie seemed too good to be true … or the enigmatic Johnathon Sebastian Everard, the Senior Elder of a mysterious cult known as Astral Quest, who believed that he was descended from aliens …?

When Larry Kent said goodbye to Eve Delmar, she was alive. The next morning she turned up dead—shot to death. But who wanted to kill her, and why? The chief suspect was her estranged husband … but he was a friend of Larry’s, and when he denied murder, Larry believed him.

So he set out to find the real killer and save his friend from a hot date with the electric chair.

But the case soon turned even more complicated. What part did nightclub owner Earl Salem play in it all? How did a seven-year old, out-of-state murder tie in to it? It was only when someone decided that Larry himself should be his next victim that he realized he was up against something bigger than he could have possibly suspected.