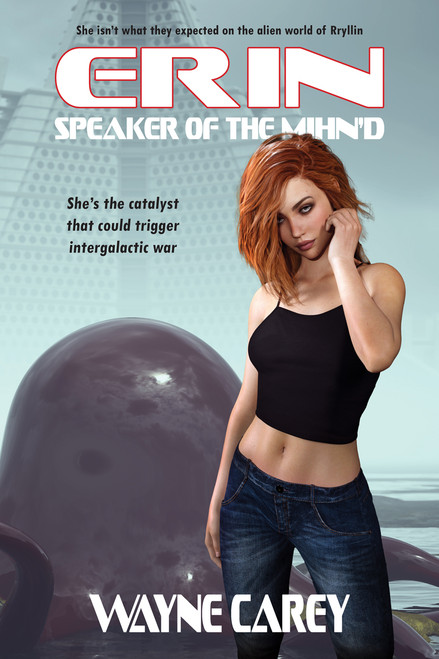 Erin is not a typical seventeen-year-old. She’s sarcastic, independent, and trapped in a life taking care of her neurotic mother and substance-abusing brother. Her deadbeat father left them years ago and ended up being part of the Earth mission to the planet Rryllin, a colony world for the Yyrrlaar, an advanced humanoid species with whom Earth has started diplomatic relations.

When her father dies on Rryllin, the Yyrrlaar insist on honoring him in a ceremony which requires a family member in attendance. Erin intends to use the media popularity to gain fame and fortune and ultimate independence. But she gets more than she bargains for when she is kidnapped by humans who have been living on Rryllin for a hundred years. Soon she’s on the run from the Yyrrlaar, charged with terrorism, and finds herself adopted by the strange race of creatures called the Mihn’d.

Caught in the middle of a conflict between the Yrrlaar and the reptilian Draq, Erin learns an even greater threat exists. Could she become the key to saving Earth and other worlds from impending doom?

Wayne Carey, a former pharmaceutical research scientist, is a regular contributor to Quatermain: The New Adventures, published by Airship 27 Productions. His political thriller, Executive Gambit, was nominated for the 2021 Pulp Factory Awards.

The Spider #7: Serpent of Destruction

The Spider #5: Empire of Doom

The Spider #8: The Mad Horde