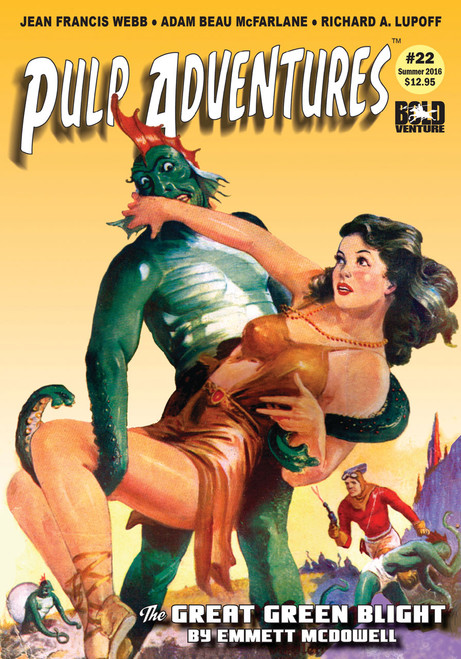 Petroglyphs by Richard A. Lupoff
The markings told a past and future tale — and a humble printer’s devil didn’t know nothing about it.
The Great Green Blight by Emmett McDowell
Spaceliners fell prey to savage phantom crews. A small band of men fight to save the Empire.
A Bondsman in the Land of Egypt by Nick Xylas
Movie-making in an exotic locale, and a crook on the run.
Sherlock Holmes and the East End Nightmare
by Adam Beau McFarlane
A heinous fiend threatens the Whitechapel district.
The Tethers by Stuart Hopen
A furlough for Orville Wootin and a flyboy squad turns deadly sitting ringside to a dance of death
Bataan Blood by  Jean Francis Webb
Jigger was too small even for a half-pint, but he had the same courage as the boys at Bataan!
Informative features on Emmett McDowell by Douglas A. Anderson and Jean Francis Webb by John Locke.
Cover by H.L. Parkhurst.