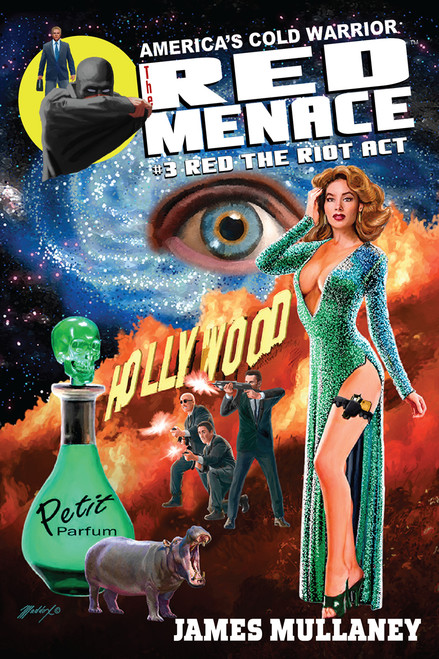 There’s more than meets the eye when inmates riot in a West Coast maximum security prison. What could transform men into wild beasts? Turns out the dead prisoners are guinea pigs in a larger scheme, and Washington sends in the only two men who can deal with the sinister plot.

Patrick “Podge” Becket and Dr. Thaddeus Wainwright trace a trail of bodies to a California cult whose demented leader welcomes all who seek truth. But enlightenment costs — mainly in the form of cold, hard cash into the bank account of failed writer and self-proclaimed High Star Admiral R. Gunn Hallifax.

Hallifax’s tall tales of out-of-this-world enemies have the gullible lining up in droves to join his church. His disciples become an earthly army for their leader’s terrestrial aims. There’s nothing otherworldly about murder and mayhem. It’s up to the Red Menace and Dr. Wainwright to discover what the cult has to do with a down-on-its-luck perfume company, a Russian hit squad, a sexy Hollywood superstar, and a threat to all America.

No matter what the stars say about it, all the Earth-bound players quickly learn even in the Golden State blood runs Red. Just like everywhere else.