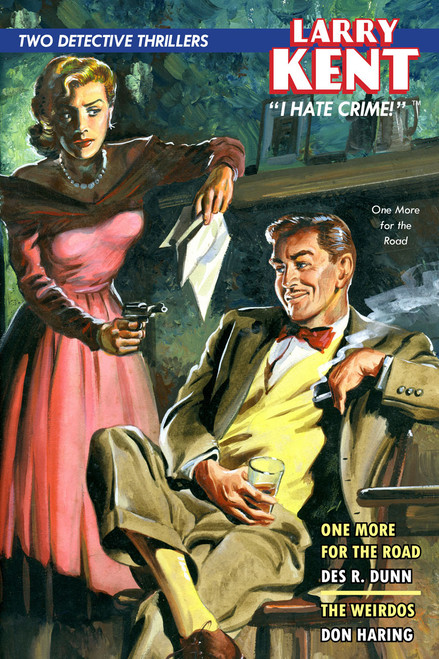 One More for the Road

A Thompson machine gun erupted its violence as soon as the door began to move. A guy stood in the opening, his big gun smoking in his hand. I took one shot and sent a shell into his stomach. The guy went back on his heels for two very deliberate paces, then folded onto his knees. His gun slipped out of his hands and came into the doorway.

There was another guy with my dying friend—a guy with the most surprised face in New York. He wore a hat over his eyes, but I could see a crooked nose and thin lips and a fat-jowled jaw.

I let him have it.

There’s something about me that gets ornery when guys pump lead into my doorway late at night.

The all-female commune was run by a movement that called itself The Angels of Love, but as far as Larry Kent could see, there wasn’t much love around. The place was cut off from the rest of the world by a nine-foot chain link fence, and the perimeter was patrolled twenty-four hours a day by rifle-wielding guards and vicious attack dogs.

Larry’s assignment was to rescue eighteen year-old Ann Brady from the commune’s clutches. It was a tall order, but Larry was prepared to risk everything to return the girl to the safety of her widowed father. Besides, he had his own score to settle with the commune’s boss-lady—the so-called White Angel of Love.