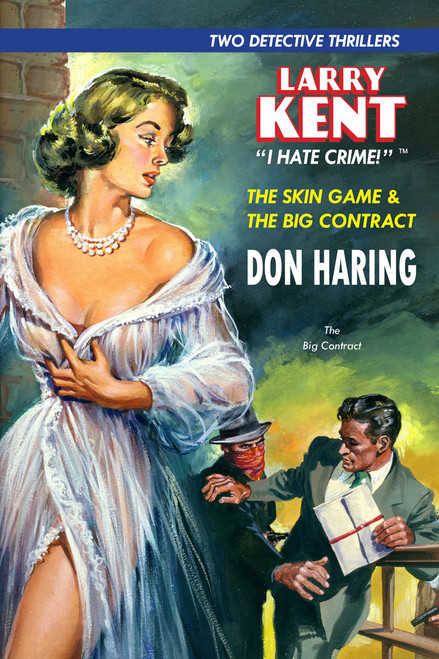 Reena Avery was caught up in the skin game. That’s why her husband killed her. Or so it seemed. But when Larry Kent looked Phil Avery in the eye, he was as sure as he could be that the man was innocent.

From that moment on, he set out to find the real killer. But the real killer was always one step ahead of him, and every time Larry found a witness … the witness turned up dead!

The trail led to a husband with a secret, a Mob connection, a hard-nosed cop who became a faithful ally … and one violent death after another.

Larry Kent was on his way back to New York, fresh from a fishing vacation in the Gulf. When he stopped off in the city of Faro his plan was to get a drink and something to eat and then move on. But the bartender at the Green Light made the mistake of serving him a Mickey Finn and then robbing him.

Larry woke up in a deserted alleyway with a pounding headache … and inadvertently became the star witness in the cold-blooded murder of a prominent businessman.

He quickly discovered that Faro was hock-deep in corruption. The Mafia was planning to move in and take over completely. Only Larry stood between the mob and their latest conquest. So he became a marked man … and every hitman around intended to collect on that Big Contract.