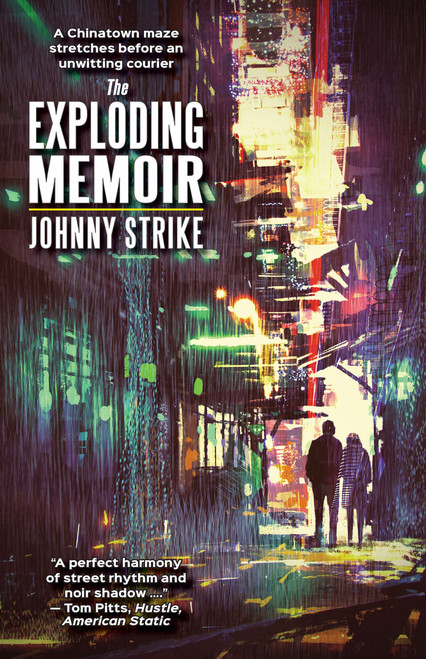 A mystery-fantasy thriller by the author of Name of the Stranger and Murder in the Medina.

Eddie Knox skips Pennsylvania before the local authorities can send him to reform school. After he settles in San Francisco’s Chinatown, the mysterious Dr. Kublar takes him under his wing. What seems a benign gesture, gifting him with a job running "errands," plunges him into a quest for an ancient stone tablet with powerful occult secrets. Now Eddie is the unwitting courier, cautiously threading his way between the authorities and the local tongs, against the backdrop of San Francisco’s underground music scene.

“These are real maps of real places. That’s what marks the artist — he’s been there and has brought it back.” — William S. Burroughs on Ports of Hell

“A perfect harmony of street rhythm and noir shadow as Strike’s anti-hero careens through the end of the sixties with cynical style. Colliding somewhere between Camus and Jim Carroll, Strike’s memoir shows us the real back alleys of San Francisco during its zeitgeist.” — Tom Pitts, author of Hustle, American Static

“After settling in San Francisco’s Chinatown, Eddie Knox is taken under the wing of the mysterious Dr. Kublar, who sends him on a series of covert missions involving an ancient stone tablet that holds powerful occult secrets. The story moves along at a propulsive rock ’n roll clip, pulling us through a chain of bizarre plot twists that draw on elements of vintage crime and science fiction, shot through with sex, drugs and mystery, and splattered like blood from a syringe against the backdrop of San Francisco’s underground music scene in the early ’70s. Like a well-thumbed crime thriller, once you pick up The Exploding Memoir you won’t be able to put it down.” — Mike Stax, Ugly Things magazine