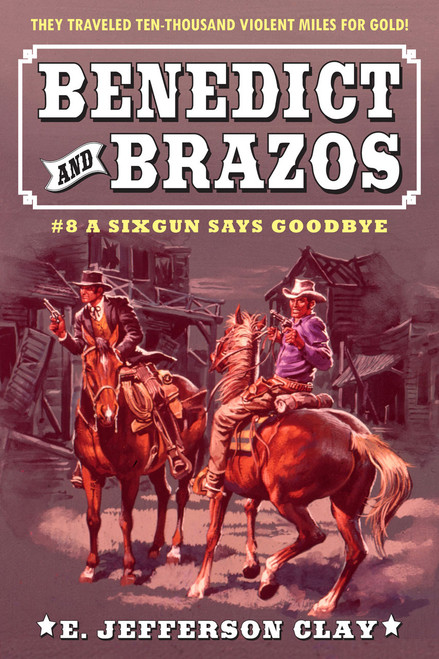 Benedict and Brazos — They braved a thousand perils in the hunt for gold!

Hank Brazos had served under Colonel Orson Clairborne during the war. So when their paths crossed again, he was delighted to meet up with his old commanding officer. Their reunion was cut short, however, when the Colonel was kidnapped, and his beautiful daughter, Angela, received a ransom demand for twenty thousand dollars.

For Brazos, the course was clear. He had to save Clairborne and make sure the kidnappers paid for their crime. But his partner, Duke Benedict, had other ideas. The only thing that mattered to Benedict was finding Bo Rangle, the man they’d been pursuing, and the missing $200,000 Rangle had gotten away with.

They went their separate ways, and rendezvoused in a gunfire hellstorm when the kidnappers decided to kill them as down-payment for the Colonel’s safety!

Benedict and Brazos bring you wild west action at its wildest! From the legendary Cleveland Publishing (down under in Sydney, Australia) came a phalanx of legendary western heroes and villains! Now Piccadilly Publishing restores these thrillers in eBook editions, while Bold Venture Press offers handsome, affordable trade paperbacks. Read A Sixgun Says Goodbye, and you'll be a fan for life!

Benedict and Brazos #09: The Living Legend