MSRP:
Was:
Now: $6.95
(You save )
"A BADGE FOR BRAZOS is a very entertaining Western novel ... These books remind me very much of episodes in the various Western TV series I grew up watching in the late Fifties and early Sixties. I loved those sorts of yarns then, and I still love them now. So A Badge for Brazos gets a big recommendation from me, and I look forward to reading the next one." — James Reasoner, Rough Edges
"Once again E. Jefferson Clay [Paul Wheelahan] demonstrates his flair for writing fast paced, colorful western action ... This is the Wild West at its Wildest! Not to be missed."  — Ron Fortier, Pulp Fiction Reviews
(No reviews yet) Write a Review 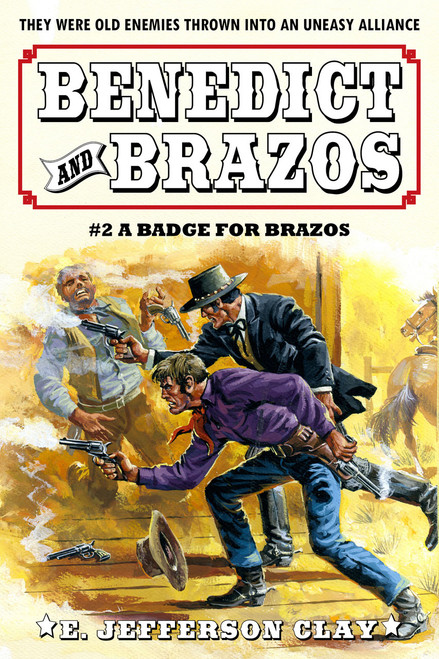 They were former adversaries who joined forces against a wartime marauder. After the war they continued the hunt, and the prize would be $200,000 in Confederate gold!

Trouble was brewing in the town of Harmony, between the gun-toughs who manned the Two-Bar ranch, the hardcases who hung around the Rawhide Saloon and the beleaguered miners out at Whipple Creek.

Into this explosive situation rode Hank Brazos and Duke Benedict. With a thin bankroll, they were looking to earn some fast money to continue their hunt for a Civil War guerilla who'd killed their comrades and stolen a fortune in Confederate gold ... a fortune they themselves planned to get their hands on.

So Brazos pinned on the sheriff's badge in return for a hundred dollars a month, and soon found himself taking his responsibilities more seriously than he'd thought possible!

Across a poker table, meanwhile, Benedict ran into an old acquaintance named Doc Christian. They were rivals, these two gambler-gunmen. And frankly, Benedict had no idea where Doc fit into the various warring factions.

When the chips were down, however, Benedict and Brazos found themselves in the thick of a fiery showdown, with just about every gun-filled hand turned against them!