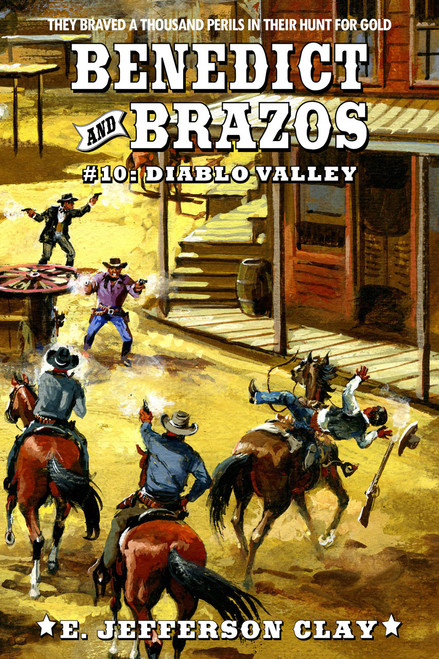 As usual, Duke Benedict and Hank Brazos were low on funds … until they ran into a drunken miner by the name of Arnie Woodcock. Arnie bore such an uncanny resemblance to a wanted outlaw called Turk Jory that it gave Benedict an idea. Suppose they were to turn Arnie in and claim the reward on Jory’s head? They could then bust Arnie out of jail, quit the territory and split the money three ways.

What could possibly go wrong? In short — everything.

Nobody figured on the real Turk Jory showing up to take a look at the man who was to hang in his place. Nobody figured that he would use the hanging as a diversion while he hit the local bank. And nobody figured that Benedict and Brazos could still come out of the whole sorry mess as heroes!

Extra: Some additional insight on the real life "Battle of Pea Ridge," where our heroes first met, as recounted by General Samuel Ryan Curtis, originally published in The Southern Confederacy, Atlanta, Georgia on Wednesday, March 26, 1962.

Benedict and Brazos #17: The Buzzard Breed

Benedict and Brazos #09: The Living Legend