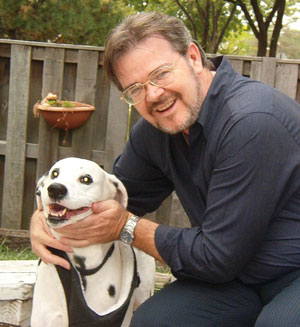 In describing his career, Robert W. Walker writes: As an award-winning author, and a “closer” at the Graduate School of Education with a Masters in English Education from Northwestern University in 1972, I began writing as a junior high student. I did my first novel at Wells High School, Chicago, IL, a novel of homage to Tom Sawyer and Huck Finn.

Later, I moved from historical novels to crime and horror, culminating in my “Instinct” and “Edge” series in 1982. I next penned my award-winning HarperCollins historical crime series: City for Ransom (2006), Shadows In the White City (2007), and City of the Absent (2008). Most recently I placed Ransom and a monster on board the Titanic in an epic entitled Titanic 2012 – Curse of RMS Titanic, followed by Bismarck 2013 – Hitler’s Curse, The Edge of Instinct, The Fear Collectors, several YA titles and several short story collections followed.

Writing as Geoffrey Cain, I confess responsibility for Bloodscreams, a horror series. This was followed by my Chicaghosts novella series. My Children of Salem and other adult historical novels are big books! My 80th novel, done for Prospective Press is Under The Dead Man’s Hat.

While born in Corinth. MS. I grew up from age four in Chicago, lived many years in Florida and Northern NY, but I currently reside in Hurricane, West Virginia.

Find my works at www.RobertWalkerbooks.com, Amazon.com and Audible.com — and at the Bold Venture Press homepage! Finally, I have three Facebook pages and a Twitter page.