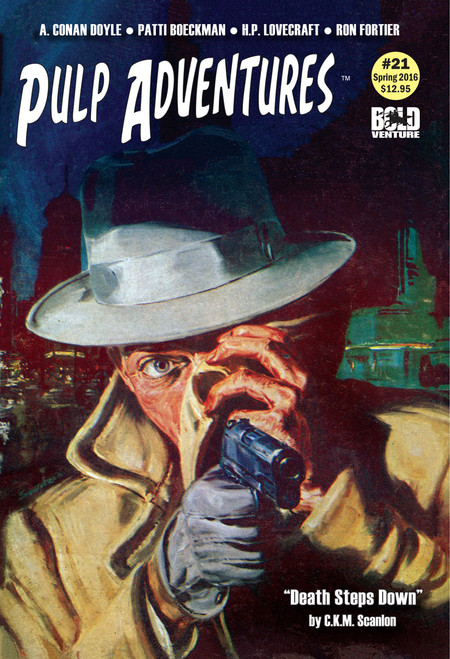 Does science fiction hold the solution to illegal immigration?

Does science fiction hold the solution to illegal immigration? What becomes of a hapless scientist when his time-travel break-through makes him Public Enemy No. One in the 25th Century? What happens when finds himself the unwitting architect of the biggest immigration nightmare of all -- through time itself?

Also featuring: Ron Fortier, Patti Boeckman, Arthur Conan Doyle, Adam Beau McFarlane, Johnny Strike, Charles Eric Maine, C.K.M. Scanlon, H.P. Lovecraft, John E. Petty, and Leland S. Chester
"The Hideout" by Ron Fortier
They planned to catch Brother Bones, the Undead Avenger, off-guard.
"Death of a Pulp Writer" by Patti Boeckman
"The Red-Headed League" by Arthur Conan Doyle
A very exclusive club leads a swindled client to the great detective Sherlock Holmes.
"Sherlock Holmes and the Secret Quarantine"
by Adam Beau McFarlane
At last it can be told— The secret of the Giant Rat of Sumatra.
"Flowers for Christina" by Johnny Strike
There was no customs inspection for his heart.
"Death Steps Down" by C.K.M. Scanlon
A thug wants revenge, but gives a detective a chance to double the score!
"The Tree" by H.P. Lovecraft
An ancient evil takes root.
"The Doom That Came to Roanoke" by John E. Petty
The squat little statue was a harbinger of evil to come!
"From the Ground Up" by Leland S. Chester
The whippersnapper thought he was a big shot, but made good on a promise!