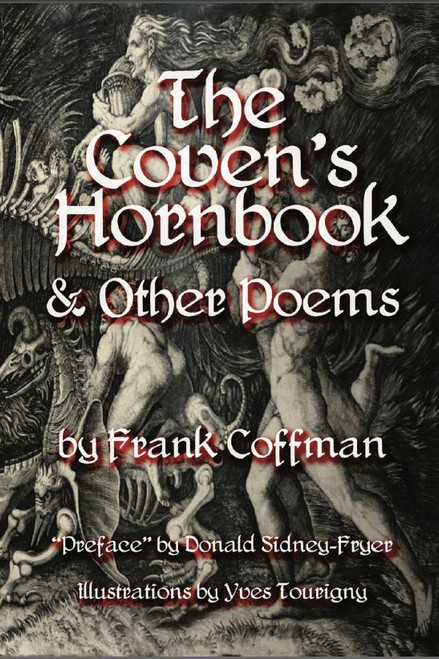 by Frank Coffman
Frank Coffman has compiled a substantial collection of 266 poems, herein. The verses cover the gamut of the genres of speculative poetry of the high imagination: Horror, Fantasy, Science Fiction, Adventure, and even Detection. The early sections of this tome explore the range of subjects in the Weird, Horrific, and Supernatural; later sections are excursions into the other speculative modes and subgenres. The final part of the book contains a section of ekphrastic poems — tributes to works in other art forms; a group of homages to admired fellow poets; and a section of "metapoetry" with poems on the subject of poetry itself and some thoughts on the writing of verse and the practice of poetic composition. The final grouping of poems are of a more "traditional" nature, including some examples of poetry written over a span of the past half century or more.

The reader will immediately note that Coffman is a traditional, formalist poet writing almost exclusively metered and rhymed verse. With the resurgence of both speculative and narrative poetry, this is not as unusual as some may think. The pendulum swing back to more formal poetry and away from the dominance of vers libre has been under way for some time. In fact, the poetics of tradition were never pushed completely aside with the advent of free verse. Also, the early poets of the speculative in the pulps were primarily traditional versifiers, and those inspirations have influenced many moderns.

He is, as he says, "primarily a sonneteer," being a great exponent of that most ubiquitous form of poetry in the Western world, the "little square of ink upon the page," the "perfect poetic paragraph." But the poems in this volume range far beyond the sonnet—although there are many sonnets contained herein, some in surprising "hybrid" forms and experimental modes. Ballads and other longer narratives are mixed in.

Coffman's other poetic love, beyond the charms of the "fourteener," is to revive and experiment with Medieval, Renaissance, and cross-cultural modes of verse. There are forms here from Welsh, Irish, French, Italian, Spanish, Catalan, Romanian, Greek, Russian, Persian, Old Norse, Anglo-Saxon, Japanese, Korean, Malaysian, and Vietnamese cultures.

In fact, so much "hybridization" and experimentation with form has been done, that the poet provides a "Glossary"after the poems to help clarify the many poetic types used. An index of poems by title and page number has also been included for easy reference. The tome offers a cornucopia of both speculative and traditional verse.