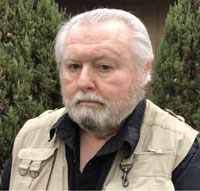 Frank Coffman is a retired professor of college English, creative writing, and journalism. He has published both speculative and traditional poetry and fiction, and scholarly research in a variety of magazines, anthologies, and journals — both in print and online. As demonstrated in this book, his work goes beyond the genres of the Speculative, and his emphases of late in the sub-genres of the Weird, Horror, Supernatural, Fantasy, Science Fiction, and Adventure. He is a firm believer in the “freedoms and serendipitously inspiring aspects of traditional verse, meter and rhyme.” Much of his formalist poetry is narrative, but atmospheric description, lyric, and even dramatic and didactic poems are to be found in his poetic corpus.

He is a member of the Horror Writers Association, and the Science Fiction and Fantasy Poetry Association. He founded and moderates the Weird Poets Society Facebook group. Previous publications include his large speculative poetry collection, The Coven’s Hornbook & Other Poems, and a chapbook, This Ae Nighte, Every Nighte and Alle: 33 Poems of the Weird, Horrific, and Supernatural. He selected, edited, introduced, and did commentary for his Robert E. Howard: Selected Poems and also wrote a slim volume of a dozen tribute poems for Howard, Coffman Street: Poems for Robert E. Howard. He has published articles on several aspects of Howard’s work.