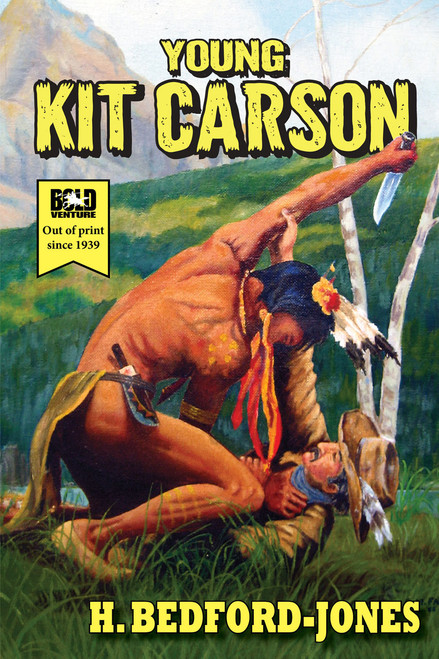 Only Kit Carson stands between hostile tribes and unethical fur trappers, hoping to extinguish the fuse on a powder keg of mistrust. Then tempers flare and the violence begins — someone is profiting from pelts —and death! Carson only wants to sell his pelts, and romance a Native-American woman — but if the hidden saboteurs want a battle, Carson is ready to make them regret in spades!

Kit Carson (1809 – 1868) was a real-life pulp hero in his own manner, an American frontiersman who braved all manner of danger as he carved out a place in history, opening the western states to all America. He was a fur trapper and wilderness guide, Indian agent, and U.S. Army officer. Few people described pulp protagonists, real and fictional, as well as H. Bedford-Jones (1887-1949), referred to by his contemporaries as "the King of the Pulps".

Originally published in 1941 in the Toronto Star Weekly, and never before reprinted, Young Kit Carson is a he-man adventure of the American frontier, high in the Rocky Mountains. Carson battles to maintain peaceful relations between the Arapaho and Cheyenne tribes, while maintaining order among the fur-trappers competing for precious pelts.