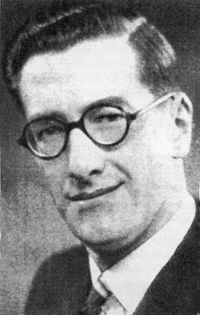 English writer EDWIN CHARLES TUBB is internationally known, having been translated into more than a dozen languages. Born in London in 1919, he lived there until his death in 2010. In a sixty-year writing career he published over 120 novels, and 200 science fiction short stories in such magazines as Astounding/Analog, Authentic, Galaxy, Nebula, New Worlds, Science Fantasy, and Vision of Tomorrow. He married Iris Kathleen Smith in 1944. His wife predeceased him, but he is survived by his two daughters and several grandchildren and great grandchildren

His first science fiction short story was published in New Worlds in 1951, and his first novel quickly followed the same year. His earliest novels were written under several pseudonyms (most notably Charles Grey) and were exciting adventure stories, written in the prevailing fashion of the early 1950s. Yet from his very first novel, his work was characterized by a sense of plausibility, logic, and human insight. These qualities were especially evident in his short stories, which were frequently anthologized, most notably by Judith Merrill and Don Wollheim in their World’s Best SF annual compilations. In 1970, Tubb was Guest of Honour at the 28th World Science Fiction Convention in Heidelberg, West Germany. ‘Lucifer!’ received a Special Award for Best Short Story at the first Eurocon in 1972. It is currently in production as a movie by Curmudgeon Films.

His output included historical adventure, detective, and westerns, but he remained best known for his numerous science fiction novels, of which Alien Dust (1955) and The Space Born (1956) were acknowledged classics. Tubb became famous for his long-running "Dumarest of Terra" series of novels, the galaxy-spanning saga of Earl Dumarest and his search to find the legendary lost planet where he was born—Earth. They eventually spanned 33 titles, the final one, Child of Earth, appearing in 2009. They have been optioned for television.

Equally well known were his Space 1999 TV novelizations, and his “Cap Kennedy” novels (writing as Gregory Kern.) Some of his finest sf short stories were collected in The Best Science Fiction of E.C. Tubb (Wildside, 2003).

Tubb continued to write dynamic new science fiction novels right up to his death; his final novel, Fires of Satan, was published by Gollancz in 2013. New editions of his novels and collections of his best short stories continue to be published posthumously, and all of his books have remained constantly in print.