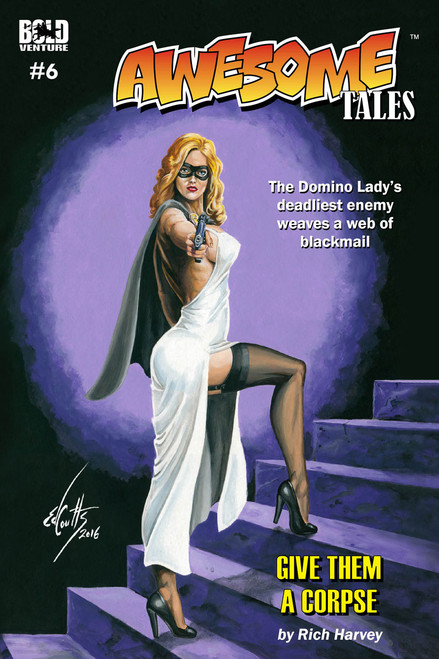 1) "Give Them a Corpse" by Rich Harvey ... The Domino Lady’s New York adventure begins when a young girl becomes the pawn in a vicious blackmail scheme. First of a series! (Part 2 appears in Awesome Tales #10)
2) "The Platinum Membership" by KT Pinto ... A small Nazi Germany village falls prey to a shredding terror, and supernatural detective Raphael Jones investigates side-by-side with the Gestapo.
3) "Caring" by CJ Henderson ... Jack Hagee, P.I., is contracted to protect a most desirable and complicated star from a kidnap plot.
4) "Dance of Death" by Patrick Thomas and John L. French ... Jack Gardner and the ethical assassin, Rao, team-up to take down a Colombian drug gang.
5) "Doubt" by DJ Tyrer ... P.I. Milo Fisk runs the gauntlet to solve the murder of a mob soldier, and locate a missing cash payoff.
6) "Clear As Glass" by Jean Marie Ward ... How does a Real Wife of Malibu handle a cheating spouse?