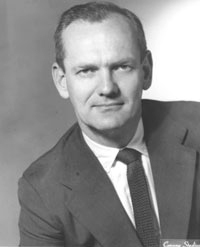 A prolific author of fiction and nonfiction, Bruce Cassiday’s career spanned five decades and various mediums. His early career was rooted in radio drama. Soon afterward he was an author and editor of pulp fiction magazines.

Bruce Bingham Cassiday was born in Los Angeles, in 1920. He graduated in 1942 with a B.A. in journalism from the University of California at Los Angeles, and spent the next four years in the Air Force, receiving battle stars and rising to staff sergeant. He engaged in North Africa and Italian theatres, and later in the West Indies and Puerto Rico. From 1946 he became a professional writer, scoring a big success with radio dramas and big CBS shows, including Grand Central Station, and Suspense. He became an editor at Popular Publications, heading both Western and Crime pulps, and published some three dozen short stories and novelettes in the late forties and early fifties, in such magazines as All-Story Detective and Dime Detective. As well as editing numerous Popular magazines into the 1970s, he also served as fiction editor for Argosy from 1954 until 1973.

He penned the adventures of agent Johnny Blood, a continuing character in Popular’s F.B.I. Detective Stories magazine. The series ran from 1949 to 1951, until the magazine’s demise. Then, bonding investigator Cash Madigan appeared in two novels — Murder Trail and The Buried Motive — in 1957.

Cassiday married Doris Galloway in 1950, and they had two children, Bryan and Cathy. In the late 1950s and early 1960s he diversified into paperback novels, excelling in crime noir thrillers for numerous publishers, such as Ace, Beacon, Belmont, Lancer and Monarch Books. Throughout the 1960s, whilst still working as an editor, Cassiday continued to produce an astonishing flood of paperback originals including private eye, police procedurals, action, war and spy thrillers, medical novels, gothics and science fiction, as well as numerous adaptations of TV shows and movies, such as Marcus Welby, M.D., General Hospital, The Bold Ones, Flash Gordon and Gorgo. They were written under his own name and personal pseudonyms such as Carson Bingham and Annie Laurie McAllister.

His output was diverse and prodigious, including numerous non-fiction books on many subjects from landscaping to carpentry, and ghosting Film Star biographies. He also held Administrative posts with the Mystery Writers of America and the International Association of Crime Writers.