The Voodoo Murders might be author Michael Avallone's love-letter to the "weird menace” pulps and cliffhanger serials. 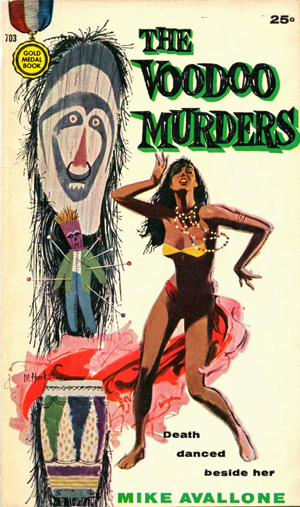 The weird-menace pulps — such as Terror Tales and Horror Stories — are known for garish covers of torture. In many instances, the covers eclipse the stories.

Portions of The Voodoo Murders read much the same way. Plot takes a backseat to spectacle. It's easy to forget the characters’ reasons for participating in this madcap adventure.

The players include the heiress of a popular doll franchise; a curvaceous exotic dancer; and a spindly mastermind plotting zombie insurrection.

Much narrative is devoted to femme fatales’ delectable bodies. The remaining prose describes crime scenes with voodoo dolls, and tribal dances. At one point, the intrepid Brooklynite finds himself tied to a stake, surrounded by gibbering worshipers. The scene is reminiscent of Ann Darrow's plight in King Kong.

If the Ed Noon novels were movies, cinema buffs would cite The Voodoo Murders as the “big-budget” installment. Hundreds of extras, exotic locales, and crazy action scenes. Avallone may have enjoyed writing these scenes too much. He strays far from the mystery, which I thought was the purpose of the novel. He crashes through the jungle, searching for his editorial trail of breadcrumbs, eventually getting the narrative back on track.

Readers may need to turn back a few pages to keep the plot points straight. The handy “Cast of Characters” prefacing Chapter One becomes a necessary Cliffs Notes to the novel. I thumbed past some description in Chapters 18 and 19 to get on with it.

Avallone deserves congratulations for this offbeat story. However, I prefer Ed Noon fighting gangsters instead of zombies, working his magic in the URBAN jungle.