Allen Bellman worked on many Golden Age characters — and proved to be quite a character, himself

At Star of David Chapel in Florida on March 11, 2020, three Navy reservists in dress white uniforms honored a fallen World War II veteran named Allen Bellman. One reservist blew taps on a shiny trumpet. Two reservists folded the American flag, which had been draped over the Captain America artist’s polished casket, into a pillowed triangle to present to Allen’s beautiful Wonder Woman wife, Roslyn “Roz” Bellman. The final service, officiated by Rabbi Loring Frank, and attended by dozens of family and friends, was not sad but celebratory and filled with warmth, truth and hope, just as though Allen were alive and present. Allen’s humble job in the Navy was to use his best talent to paint emblems on American fighting planes. Three years ago, Allen and Roz shared their home, lives and memories with Rich Harvey and me, to produce his life story in a book. The privilege to call this patriot our “friend” came along with the experience. He will always remain a hero to us. 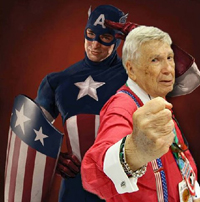 The death of Allen Bellman (1925-2020) marks the passing of a friend and collaborator. He was one of a handful of surviving contributors to the "Golden Age of Comic Books." In Timely Confidential: When the Golden Age was Young, he chronicled his time with Marvel Comics (then known as Timely Comics and Atlas Comics) and Lev Gleason Publications.

Allen’s comic career ending in the 1950s, during a period when Dr. Frederick Wertham’s Seduction of the Innocent offered “evidence” comic books led to juvenile delinquency. He managed an auto supply chain with his brother, then returned to commercial art with advertising agencies. After moving his family to Florida, he worked for newspapers until his retirement in the 1980s.

As comic books became more visible, due to the success of movies based on Marvel Comics characters, Allen told his grandchildren and nieces and nephews he worked for Stan Lee. He contributed to characters such as Captain America, The Human Torch, the Submariner, and many others. Frustration often accompanied his reminisces … his younger siblings simply didn’t believe him.

With his intrepid wife Roz Bellman close by, Allen was never shy about hawking his commissions, prints, or his book Timely Confidential. Whenever a potential customer hesitated, “I’ll have to think about it,” Allen would remind them of his age. “Young man,” Allen retorted, “I don’t have much time left for you to think about it.” Often, the plucky artist successfully closed the deal.

During the last decade of his life, Allen was showered with proclamations and industry awards, including the distinguished Inkpot Award. In this, Allen’s many fans and friends can take solace — Many of his contemporaries died thinking their work forgotten. He became one of the few Golden Age comic book illustrators to actually hear the praise and recognition. He spent the remaining 12 years of his life basking in the limelight at comic book conventions.

“I was there!” he declared when referencing the Golden Age at Marvel Comics. Those words were true of his twilight years.