Q & A with the "enigmatic" author Stuart Hopen ...

The Twilight Patrol is the brainchild of Stuart Hopen. The series dwells on the metaphysical aspects of good and evil, reality and fantasy ... there's also lots of high-flying aerial dogfights, complete with chattering machine guns, and creepy villains. A hallmark of the series is the femme fatale, but beware... the more delectable the villainess, the deadlier they are ...

Here's seven pertinent questions we put to Stuart, the creator of the most unusual "new" hero pulp series ... 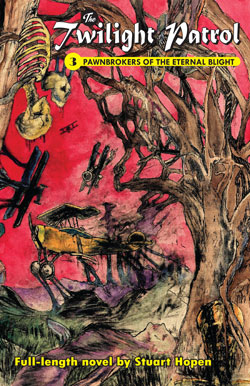 BVP: You practiced the dual career track of law and medicine. Maybe that contributes to the schizoid nature of The Twilight Patrol?

Just to be accurate, my career in law and medicine isn't dual — I practice law for a large healthcare system, which involves matters in both disciplines. I was raised by a physician who wanted me to be a physician in the worst way possible. I fought it tooth and nail, proclaiming in my early teens that I was going to be a writer and an artist, dedicating myself to that end. I majored in English, with concentration in Creative Writing at Princeton, and took an enormous number of studio arts courses there. I tried the starving artist routine for a while. Found it didn't much agree with me. Went to law school and was hired as in-house counsel at a hospital where I had previously worked as a nurse's aide. I've held that attorney job for over 36 years. Despite my best efforts, I ended up in medicine, anyway.

BVP: How did you develop the concept of The Twilight Patrol?

It really began when I was about 8 years old. The Miami Herald had tracked down the retired author of G-8 and His Battle Aces, a pulp aviation adventure series. They ran a story about the series in the Sunday supplement magazine, Parade. I was transfixed by the article, haunted by the covers and illustrations that were reprinted there, and the promise of fantastic air adventures. Many years passed before I could actually get my hands on the books. When I did, I found a certain magic there — but I was also profoundly disappointed. The level of writing just wasn't equal to that of my favorite pulp writers. So I set out to create something along the order of my vision of what G-8 and his Battle Aces would have been if it had lived up to my dreams. And I wanted to do it in a format that recreated the total experience of the old magazines themselves.

BVP: Why the intellectual approach to The Twilight Patrol, as opposed to a typical action-oriented approach?

I aimed for both. I love action, but I also love intellectually challenging books. The difference between action that is mere fury (or furious formula) and action that contains adventure is the ideas that lie beneath the action. One of the basic purposes of The Twilight Patrol series is to attack divisions that seem absolute but are really related and interdependent, like intellectual content and action. There’s plenty of action in the Twilight Patrol novels. And a lot of adventure, both visceral and cerebral. There’s also an in-joke in using the format of pulp magazines for this purpose. They were originally marketed using the tag line: “All action and no philosophy!”

BVP: Twilight Patrol strikes me as the hero pulp H.P. Lovecraft might have written. Who are your literary influences?

I can see how Lovecraft would immediately spring to mind. Lovecraft employed a variation of Gnostic mysticism to reveal the universe as being utterly mechanical and devoid of significance. It is kind of a spiritual experience of science — with the result being absolute horror. 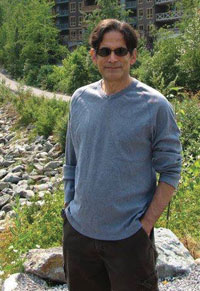 As a curious side-note: When I was in my mid teenage years, I fell under the spell of the New Wave science fiction movement, which blended literary values and experimentation with pulp science fiction adventure elements. The classic anthology, Dangerous Visions, has become emblematic of the movement — and it features writers who played an enormous role in shaping my artistic sensibilities — J.G. Ballard, Brian Aldiss, Philip K. Dick, and Samuel R. Delaney. It featured Phillip Jose Farmer, who wove an integrated mythology out of pulp fiction characters with his Wold-Newton family chronicles. And Norman Spinrad, who wrote my personal favorite review of my novel, Warp Angel. And the sequel anthology, Again, Dangerous Visions featured a story by fellow Bold Venture Press author, Richard A. Lupoff, which Harlan Ellison called “one of the three or four really indispensable reasons for doing this book.”

BVP: Tell us more about PastModern Pulpblications, the editorial staff and magazine line-up.

BVP: Do you consider yourself a horror writer?

Yes and no, which is kind of a generic answer to most questions one poses to a lawyer. Famously, there is a fine line between horror and humor, and I often aim directly for that line. I have a very dark sense of humor. That sometimes happens when you spend a good part of your life working in a hospital, with a front row seat in theaters of pain and terrible tragedy. It is a coping mechanism. My writing could fit into a number of categories, but the one most easily identifiable is horror — apart from the category of being like nothing else you’ve ever read.

BVP: Will there be more Twilight Patrol stories? Is there a significance to the number seven?

The series will end with issue number seven. And the significance of seven, in this instance, is that finishing eight would probably finish me.

BVP: Does The Twilight Patrol and The Whisper exist in a "shared universe," with the possibility of a crossover storyline?

The universe they share is the universe of my imagination, in which they will never meet.

BVP: Aside from The Twilight Patrol and The Whisper, what other PastModern Pulpblications might be rescued from obscurity?

When I finish The Twilight Patrol, I plan to write an academic work about the practice of healthcare law. And after that… who knows?