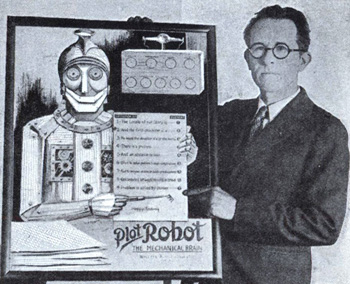 “With the aid of the Plot Genie, one does not have to wait for a rare flash of inspiration for a story. The Genie will provide a complete plot framework every five minutes, and I can show any author where it could have developed the plot structure of any story he ever wrote.” — Wycliffe A. Hill, “Plot Genie: General Index”

With those brave words, the world was introduced to Plot Genie ...

The origins of the book read like pulp fiction itself. Wycliffe A. Hill had been kicking around Hollywood when one of his motion picture scripts was returned by the great director Cecil B. DeMille. "...Although an interesting narrative," DeMille wrote, "it contains no dramatic plot."

Apparently, Hill vowed to avenge the death (or rejection) of this screenplay and dedicated his life to the pursuit of "this thing called Plot." It's anyone's guess as to what flew in through his window, but he was inspired to created his book containing lists of plot elements, characters, and settings, and invented the cardboard Plot Robot wheel to accompany it.

Some pulp authors dismissed it. Others turned to it for occasional assistance. A few even modified it (and other plot generating devices) to accommodate their particular needs. During the Depression, when newsstands were filled with pulp magazines, and every magazine sported at least one short story, Plot Genie might have seemed like a ray of hope to struggling, unemployed citizens. Purchase a book for five dollars (which was like spending seventy-five in those days), dash off a few lines, and tell the bank to stand by for your deposits.

Plot Genie and its brethren inspired a clever scene in Blonde Inspiration (1941). It was directed by Busby Berkeley, renown for his musical numbers. Here's a link to YouTube page with the scene: Blonde Inspiration: How To Write Successful Fiction: Plotting. To learn more about Plot Genie, and similar devices from the Pulp Era, we recommend "Help For Writing Your Yarns" by Edward J. Wood. You'll find many other interesting articles at ThePulp.net.

The Plot Robot was a cardboard wheel, secreted behind a full-page cardboard illustration of a genie guiding an aspiring writer. Random numbers were visible through a tiny cut-out window in the crystal ball illustration. Each Plot Genie book contains a "formula," with an average of nine steps to plot construction. Jot down your random numbers in each space, then consult the corresponding pages to determine the plot structure of your story.

These cardboard wheels are rare, more so than the Plot Genie books themselves. They were inserted into the published books, not bound against the cover, making them infinitely easier to lose. Apparently the publishers designed one wheel for use with all supplemental volumes. Quantity is king in publishing, even today, and production costs might have been prohibitive for custom wheels. Thus, the Action-Adventure supplemental volume was not accompanied by a Plot Robot featuring a pith-helmeted genie.

Those prohibitive costs frightened the bean-counters at Bold Venture Press. We struck upon the happy idea of creating a Plot Robot in PDF format. Download the two-page document.Once you print it, using some thick paper, all you'll need is a scissors and paper fastener. You can also use an online "Random Number Generator." Bold Venture Press may release a wheel for purchase in the near future. In the meantime, use the Plot Robot download to create your own pulp fiction yarns!