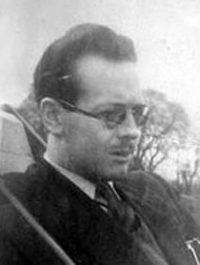 English writer Norman Firth was born in Birkenhead in 1920. Following his marriage in 1944 he became a full time writer, and was immediately successful, taking full advantage of the peculiar British climate of “mushroom” publishing caused by wartime austerity, which continued for several years after the war finished. Myriad small presses sprang up, hungry for all kinds of genre fiction, both adult and juvenile. Firth was a talented and compulsive writer, and was soon averaging 6,000 words a day. In 1946 he was briefly an associate editor for the British magazine Galaxy, and gained a thorough grasp of writing markets. He adopted the byline of ‘N. Wesley Firth’, adding the middle name of his father to his own.

Firth was commissioned by many small publishers such as Bear Hudson, Curzon, Gerald G. Swan, Hamilton & Co., Mitre Press and Utopian Publications to turn out lurid crime, western and science fiction stories. The stories were of all lengths, from short stories to novels. Despite their speed of production, they were vividly exciting, where the author had evidently been seized by a really good idea.

In the late 1940s Firth accepted a lucrative commission from Utopian Publications owner Benson Herbert to write 30,000 words a month of “spicy” stories for his various magazines. As an added inducement Herbert offered accommodation for the author and his wife Olga and their baby daughter Sheila in the basement of his home. But after contracting TB (then incurable) Firth moved back to his home town of Birkenhead, where he died in December, 1949. He was only 29, but had published several million words. He continued writing right up to the end of his life, and managed to complete and sell his first full-length crime noir novel, When Shall I Sleep Again? It was published posthumously in 1950, and quickly selected for republication by The Thriller Book Club.

Loosely based on James M. Cain’s “noir” classic The Postman Always Rings Twice, this engrossing adult novel displayed for the first time the true potential of its author. His very last crime novel, Murder at St. Marks was also a superior effort. Completed just before he died, it was never submitted anywhere. The battered and fading mss was recently rediscovered by his daughter. After her agent had retyped and edited it, it was immediately accepted when submitted to UK publisher F.A. Thorpe in 2014. The best of his earlier works were also returned to print in their Linford Mystery series

Many of Firth’s myriad pseudonyms remained undiscovered until recently. Philip Harbottle, agent for Firth’s estate (working with his collecting colleague Morgan Wallace) has recently discovered several more. Bold Venture will be publishing new collections of the best of them, beginning with Murders Macabre.