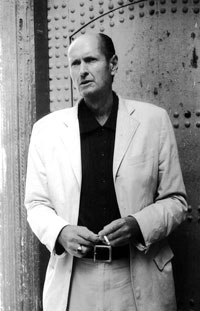 Born Gary John Bassett, Johnny Strike (1948-2018) was an American writer influenced by hardboiled fiction of the 1950s. Crime digest magazines, like Manhunt and Justice, and film noir appealed to his fiction writing sensibilities. Though he wrote several noirish novels and short stories, he was known to music fans as a songwriter, guitarist and singer for the proto-punk band Crime, based in San Francisco.

Headpress published Strike’s first novel in 2004, Ports of Hell, with a blurb by William S. Burroughs. Born Gary John Bassett, Johnny Strike was as prolific a writer as he was performer. Fans of good writing will want to read his last book, The Exploding Memoir, published just before he died. It recounts the adventures of a proto-punk mod-turning-glam in post-hippie San Francisco with an underground band called WolfSnake, the first to wear all black in that multicolored scene.

Strike also interviewed Paul Bowles, Mohamed Choukri, Herbert Huncke. He traveled extensively with extended stays in Morocco, Mexico, and Thailand. Those locales would figure prominently into his fiction, particularly Name of the Stranger and Murder in the Medina. His writing has appeared in Ambit magazine, Headpress Journal, and Pulp Adventures. In 2008, Rudos and Rubes published his short story collection, A Loud Humming Sound Came From Above, illustrated by Richard Sala.

The Exploding Memoir, was released from Bold Venture Press in July 2018. Like much of his work, the story was equal parts biography and fiction, but it was never easy to tell where one left off and the other picked up. Strike used San Francisco and Tangier as frequent locales, utilizing both in Name of the Stranger, his homage to the atmospheric works of Patricia Highsmith.

Two months after Exploding Memoir's release, Strike died in September 2018 after a long bout with cancer.

His novel Society of Ghosts was recently released from Bold Venture Press in 2021.