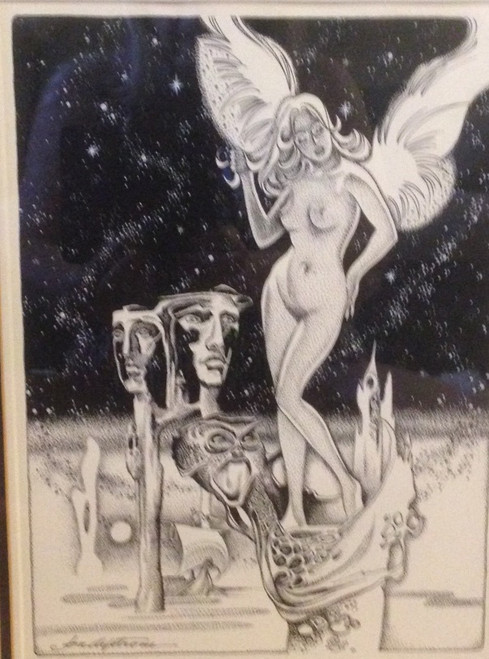 TWO ITEMS for the PRICE of ONE!

The price suggested  by an art dealer for this Jon Arfstrom original is $1,200, only suggested.

The drawing, 12 X 9-inch is framed and matted (about 21 x 16 overall). The small 7 x 5-inch card was Jon Arfstrom's promotional mailer, a self-portrait, is in a simple certificate frame.

In the mid-1980s, during a field trip to Jon Arfstrom's farm with an entourage from a small Lovecraft convention in Minnesota, Audrey Parente won this original work, frame and all.  A few dozen were in attendance. An upside-down fedora rested on the fireplace mantel in his living room, with a little note pad with a pen next to this framed piece. Mr. Afrstrom asked everyone to write their names and addresses, and drop them into the hat. He ushered the group into his kitchen and served apple cider, made from his own apple tree produce, with pastry made by his wife. A tour of his home and art gallery followed thereafter.

The event ended back in the living room by the big fireplace. Arfstrom stepped to the mantel and pulled out a name from the hat! Audrey Parente? Yes! Somewhere, there's a photo taken later of Parente holding the illustration with some of the guests others around her, but that photo hasn't been located.

Jon Afrstrom was a guest of honor at Pulpfest 2015 (Columbus, Ohio). During a conversation, Parente showed a photograph of this piece to the artist. Unfortunately, his memory had faded, and he couldn't recall any details regarding the illustration's backstory.